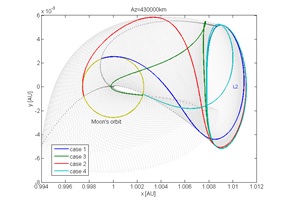 Astrodynamics has a long history beginning from 17th century, when Isaac Newton introduced his theories. Astrodynamics studies motion and equilibrium of celestial bodies based on Newton’s law of universal gravitation and it is the basics of Astronomy.

It has been developed so early that one might think that there’s no chance of developing it any further. However, increase in PC performance and technical developments like ion propulsion and solar sailing create a new field in astrodynamics.

The right figure shows the result of trajectory optimization in the HAYABUSA's case. HAYABUSA traveled from the Earth to Itokawa by using Low-thrust and Swing-by.

Mission design and System development are also our research topics. These topics require a wide range of knowledge including linear algebra, statistics, programming, astrodynamics, and satellite design. You could fill up the lack of knowledge in the practice while doing your research.